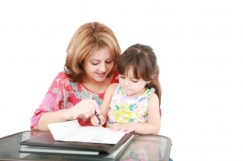 In Canada, as in several parts of the world, many children grow up in multiple linguistic contexts. They often live, learn, and interact in different languages at home, at school, and in other contexts.

A number of research studies have demonstrated that it is beneficial for children to grow up bilingual from their earliest years (see Ellen Bialystok’s work for example). A summary of the research is available here. Bilingual children are better able to understand others’ perspectives and adapt their communication accordingly. They achieve higher scores than monolingual children on a number of cognitive ability tests – including mental flexibility and problem-solving. Some of these cognitive benefits can be seen as early as 7 months of age in babies who were exposed to two languages since birth (Kovacs & Mehler, 2009). Some of the most important cognitive benefits enjoyed by bilingual children are in the area of executive function – such as cognitive flexibility, attention, and control. These skills are critical for cognitive functioning. Bilingualism also seems to have protective effects against the onset of cognitive decline in old age (Bialystok, Craik, & Luk, 2012). So, early bilingualism can be a significant cognitive advantage for lifelong development.

The challenge for early bilingualism, however, arises when there is no apparent overlap between the home language(s) and the language(s) of schooling. In these contexts, when children enter the school system, the adjustment process for them and their families can be rough. Children and families need to acquire the language of schooling, while at the same time maintaining their home language:

Schools and communities play an important role in supporting both the home language and the language of schooling at this critical transition point. If children and families are not well supported in their dual language learning, there can be detrimental effects.

Last week I sent an email to the Exploring Childhood Studies list-serv, asking for information, ideas, and resources on this very topic. (If you are interested in being connected with a diverse group of helpful childhood studies scholars, I recommend you join this list-serv.) I received a number of helpful suggestions and connections from the group, and thought I would share them here so that they would reach a wider audience. I have also added to this list resources that I have found myself over the past few weeks.

Thanks to everyone who has sent information and resources my way. Please feel free share thoughts, ideas, and additional resources in the comments section.