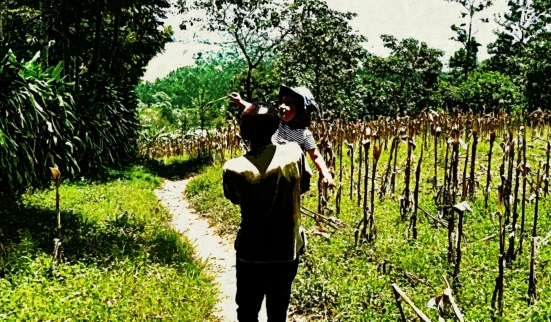 Z with one of his new friends in Arusha, Tanzania – February 2016.

In late February, my family landed at the small Mwanza airport in Tanzania. With our luggage and our toddler, Z, hoisted on my hip, we climbed down the airplane stairs and onto the shuttle bus that would take us to the terminal. The shuttle bus was packed and I remember feeling slightly disappointed that no one offered me their seat upon seeing me struggling with the weight of my bag and my 27-pound toddler.

Even before the shuttle bus started moving, the Tanzanian woman seated right in front of me made eye contact with Z and started playing with him. She reached out as if to take him, and I felt a little bit taken aback – here was a complete stranger trying to take my son from me. I didn’t say anything, but I did not lean forward to encourage him to go to her the way I might have had it been a family member or friend. She continued talking and playing with him, and once again tried to take him – and this time she succeeded in taking him from me. My husband and I looked at each other in surprise. I didn’t want to be rude, and I also figured I had nothing really to worry about since they were seated right in front of me on a packed shuttle bus. So I let things unfold as I watched cautiously. The woman played with Z, talked to him, counted his fingers with him, and even let him stand on her lap with his dirty shoes so that he could have a better view of the airplanes and helicopters around us. When the shuttle bus reached the terminal, she handed Z back to me with a smile, and we all got off the bus and went our separate ways. We realized that she had taken him from me to help us out, and she had done it as if it was simply the natural and expected thing to do.

Those few moments were key to our transition (albeit temporary) from self-reliant and cautious “helicopter” parents, into more interdependent, trusting, and relaxed parents who accepted the help of the community around us. At our hotels in Mwanza and Arusha, staff frequently took Z and helped care for him while we handled hotel paperwork, ate meals, or took our things from the reception to our room. At the office of the Mwanza organization I was visiting, my colleagues picked up Z and showed him around. Older children on their way home from school would call out “Toto!” and pick up Z and play with him. Very quickly, Z also accepted this as the new normal, and went happily to strangers – whom he considered to be his new ‘friends’. He would actually be in the arms of someone he didn’t know and point to them and tell me, “friend”. By the end of the trip, even I was proactively handing Z over to people I didn’t know when I needed help handling him while I was picking up luggage or sorting through something. This is something I could never see myself doing in North America!

There is plenty of research confirming the value of community support for parents’ well being, as well as for children’s development and long-term outcomes. Here are some examples:

Of course, people in many cultures all over the world do not need research to confirm what they know intuitively. It almost sounds cliché to cite the African proverb, “It takes a village to raise a child”, but it’s true. In Tanzanian culture, in my family’s Pakistani culture, and in many other cultures around the world, extended families and communities rally around families, particularly those with babies and young children, to create a social support net that promotes well being, reduces stressors from daily life – such as child care and household support, and buffers families during major transitions – such as the birth of a new baby, a loss of income, or the absence of a caregiver.

This is why one of the key goals of early childhood programs, especially programs targeting vulnerable families who are at risk of social isolation, should be to build a support network among parents. Parenting programs often focus on building parents’ knowledge and skills in supporting their children’s development – and this is important. But without a supportive community, families may lack many of the supports that can promote their – including their children’s – health, development, learning, and overall well being; and may become especially vulnerable to the damaging effects of the stressors they face on a daily basis.

As for us, we’re back in the U.S., and sadly, for the most part, back to our self-reliant, cautious parenting. But we’re trying to reach out more to family and friends when we need help with our little one, and we’re trying to build a social network around ourselves by actively (re)connecting with family and friends, through our faith community, and with our neighbours. We want our family to contribute to and benefit from that sense of belonging and community connection that sustains and nourishes children and parents all over the world.

On a related note, this Science of Early Childhood Development (ECD) eMessage on families and interconnectedness came into my inbox last month. I love the video clip of the young children in an extended family in rural Afghanistan. If you’re interested in receiving these quick summaries of current ECD research by email, you can subscribe to the eMessages here.

How do you build a community around your family?

Benard, B. (1991) Fostering Resiliency in Kids: Protective Factors in the Family, School and Community. Portland, OR: Northwest Regional Educational Laboratory.