In today’s world, children have unprecedented access to media and technology. As most parents will attest, young children are drawn to, adept at, and perhaps even addicted to the TV/videos, mobile/cell phones, and iPads and other tablets available to them in their homes and from the adults around them. This week, over two posts, I am summarizing some of the research on the effects of children’s exposure to media and technology on their development and learning. In today’s post, I will focus on the effects of television and other screen media on young children’s learning and development. In my next post, I will focus on the effects of ‘educational’ videos and DVDs such as ‘Baby Einstein’. 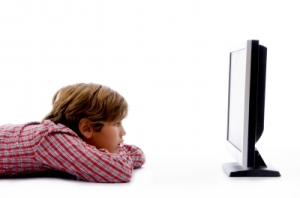 Preschool children watch an average of 4 to 5 hours of television each day (Christakis et al., 2013). In addition, the average American child between the ages of 8 months and 8 years is exposed to almost four hours of background television per day (Lapierre, Piotrowski, & Linebarger, 2012).

What are the effects of all of this exposure to television for children and families? Does the age of the child matter? Are some types of media programmes better than others?

What does the research say about the effects of television and other screen media on young children’s learning and development?

Two good reviews of the research on cognitive effects of television watching can be found here: Christakis (2008) and here: Media Use by Children Younger Than 2 Years (American Academy of Pediatrics, 2011).

So, to sum it up, there is a lot of research indicating that generally, for children aged 2 years and younger, there are adverse cognitive, behavioural, and physical health effects associated with television watching in early childhood. However, there is some research beginning to emerge that at least effects on language development may vary according to different TV programmes. Above the age of 3, findings are more mixed. Indeed, both the Canadian Pediatric Society and the American Academy of Pediatrics discourage the use of television and other media in children under the age of 2, and recommend limits on both the time and the content of televison programmes that children are exposed to after the age of 2.

It seems that the best approach to take is to limit children’s screen time, and if/when they do watch TV, to carefully examine the shows they watch for how they promote thinking, language development, and prosocial behaviour.

What are your thoughts? Please share comments and other relevant research on young children watching television in the comments section below.

Stay tuned for my next post which will review research on the effects of educational videos and DVDs such as ‘Baby Einstein’.

Update (May 6, 2013): Check out this TEDx talk in which Dr. Dimitri Christakis, a professor of pediatrics  (whose research is mentioned in this post), summarizes current research on how television and other screen media affect young children’s developing brains – with lifelong consequences.