Today’s post is the third in a six-part series reviewing the historical and current context of education in Pakistan. These posts include:

Some of the information in this series is drawn from the book, “Going to School in South Asia” edited by Amita Gupta, interwoven with my own understandings of context, values, and beliefs in Pakistan. 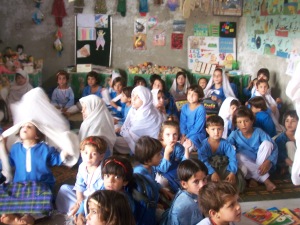 Children at a government school in Balochistan. Copyright Sadaf Shallwani. All rights reserved.

From the 11th century onwards, various Islamic invasions and influences entered the Indian region. The greatest and longest lasting Islamic influence on India (including present-day Pakistan) was the Mughal empire which began in the 1500s and lasted about three centuries until British colonial rule (Gupta, 2007).

Education as a Right and Duty in Islam

In Islam, education is considered to be a universal right. Islamic monarchs such as Raziya Sultana, and Mughal emperors such as Humayun, Akbar, and Jehangir, encouraged the establishment of many village schools, colleges/universities, and libraries. Many Islamic rulers encouraged healthy dialogue and interaction between Hindu and Islamic cultures (Gupta, 2007).

In fact, in Islam, education is not just considered to be a right, but a religious duty, across gender, age, and social class (Ali & Farah, 2007). Prophet Muhammad has been cited as saying, “Seek knowledge from the cradle to the grave.” Even today in Pakistan, parents and teachers alike generally place great emphasis on children receiving at least basic education.

In early Islamic traditions, there was no distinction between worldly and religious education, and both were considered important (Ali & Farah, 2007). Similar beliefs and values are held in present-day Pakistan – families want their children to receive both worldly and religious education, and consider it the role and responsibility of the teacher and the school to inculcate it in their children.

Under Islamic influences, the Madressa system was established in India (Ali & Farah, 2007). Islamic rulers provided support in the form of land and endowments. The Madressa system was initially centered around the mosque, while teaching both religious and worldly knowledge. As educational activities grew, separate spaces were established to accommodate primary education, secondary and post-secondary education, and libraries. In addition, private educational activities occurred in the homes of students and in the homes of scholars. Originally Islamic education integrated both religious and worldly knowledge. However, over time the Madressa education system became more limited to religious matters (Ali & Farah, 2007), as remains the case in present-day madressas in Pakistan. Madressas today also remain dependent on endowments, and their curriculum/approach is often dictated by those providing the funding.

Many madressas operated as full-time residential schools, and often provided boarding and lodging as well as scholarships to students from poor families (Ali & Farah, 2007). This enabled madressa education to be accessible to all. This tradition of providing boarding/lodging continues even today. In Pakistan, poor families will often opt to send their children to madressas rather than private (secular) or government schools for financial reasons. While government schools do not charge fees, school supplies and uniforms still cost money and families still have expenses relating to the feeding and care of their child. Madressas are generally are free of cost, provide boarding and lodging, and sometimes even provide an additional stipend to the student.

Other Forms of Education

Another form of education in Islam falls under the Sufi practice. Sufis devote their lives in search of the truth, guided by a deep love for the Creator. In the Sufi tradition, disciples grow attached to and learn deeply from their Sufi teacher (Ali & Farah, 2007).

Alongside Islamic education systems, secular (government, non-government, and private) systems continued and continue today to serve students. In addition, other approaches to learning, such as apprenticeship and private home schooling, also educate children.

Next: In the 1600s and 1700s, Western / European influences began gaining predominance in the Indian region. See my next post for a discussion on Western – British in particular – influences on education in Pakistan.